This is the replay of a Facebook Live broadcast with tips for speakers and Toastmasters leaders about how to use the Facebook platform. You may want to fast forward to about 3:40 when the program really begins (or look at how I try to stall for time in those first few minutes while I’m finishing the preparations I couldn’t get done until the broadcast started streaming).

To see it in context with all the comments, go to
https://www.facebook.com/ToastmastersOnlinePresenters/videos/1506183959488579/

As a live streaming video tool available to any Facebook user, Facebook Live presents a tremendous opportunity for clubs and districts to showcase their talent.

If we want to demonstrate that Toastmasters is more than a bunch of people giving PowerPoint presentations to each other, what better opportunity than the humorous speech and table topics contests? Since the district is the top level of competition for both table topics and humorous speeches, this is a great opportunity for districts to show just how compelling and entertaining a good Toastmasters speech can be — and perhaps inspire more people to visit a club and join. And by getting current members to share the video with their friends, districts have the opportunity to reach a sizeable local audience.

Below, I’m sharing a (slightly edited version of) the proposal I just sent to my district leadership. My suggestion is that other districts who have their conferences coming up consider this as well.

Update: One question I’ve gotten about this idea is what to do if one or more contestants do not agree to the broadcast. My answer is you acknowledge and respect their wishes, without pressuring them. Ask if they will agree to be video recorded, with the opportunity to review the video before it is published (see these tips). That’s an alternate strategy that’s perfectly valid — I just see Facebook Live as an ideal way of reaching a larger audience, if the speakers and contest organizers can agree on it.

I’m writing to suggest we take an advantage of a publicity, recruiting, and social media marketing opportunity by broadcasting the district humorous speech contest on Facebook Live.

I have been a proponent of video recording the contest speeches for the past several years, but a live broadcast from the event could be more engaging and reach a larger audience. If you agree, the planning and preparation would need to start soon — at least as soon as we know who won the division contests.

This would only work if all the contestants agree in advance and complete the video release form from Toastmasters International. This would be a live broadcast, meaning there will be no opportunity for the speakers to review the video before it is published. (However, we might offer them the option of having their video removed from the replay after the fact — I doubt anyone would request that, but it might be reassuring for them to know they have the option of destroying the evidence if they really mess up on stage).

I would NOT suggest doing this for the International Speech Contest, as the winners are often sensitive about not wanting to “tip off the competition” by sharing the video beyond the club. But the humorous speech contest is ideal, engaging content, and a chance to show off some of the best talent in our district. If this experiment works well, I also would suggest doing Facebook Live for the Table Topics competition in the spring.

If you’re an active Facebook user, you have probably seen the alerts that some contact in your network or some business page you’ve subscribed to is going live with a Facebook video. These productions range from professional broadcasts to extremely amateur selfie video. The Online Presenters club I founded recently did a workshop (see replay) with the author of Facebook Marketing for Dummies on the Facebook Live tactics available to small businesses and nonprofits.

Live video tends to command more attention because there is more of a reason to turn in right now while an event (such as our contest) is happening. When a Facebook user tunes in and “likes” or comments on a live video, their friends who are online at that moment will also get an alert and may tune in, broadening our reach. We can do some advance promotion to tune in at the time we expect the conference to begin by visiting the District Facebook page https://www.facebook.com/District47Toastmasters – and that they should “like” the page to get an alert when the broadcast starts.

We can also make an announcement encouraging the in person attendees to share the feed as it is starting (right before they turn off or at least silence their phones and turn their full attention to the speakers).

Speakers can encourage family members or club members who are not in attendance but would like to see the speech to tune in.

I would also suggest doing a press release mentioning that the contest will be broadcast on Facebook Live – a detail that might make publications more likely to publish the release, send a reporter, or perhaps tune in for our broadcast.

In addition to obtaining the video release forms from the speakers, here is how I would recommend setting this up:

I am sure there will be other details to be worked out, but that’s everything I can think of right now. If you adopt this proposal, I will be happy to do what I can to contribute to making it work, along with your public relations and social media team.

David F. Carr, versatile and inventive writer, editor, and web consultant
Author, Social Collaboration for Dummies
See my work on Forbes, connect with me on Twitter, LinkedIn, or Facebook 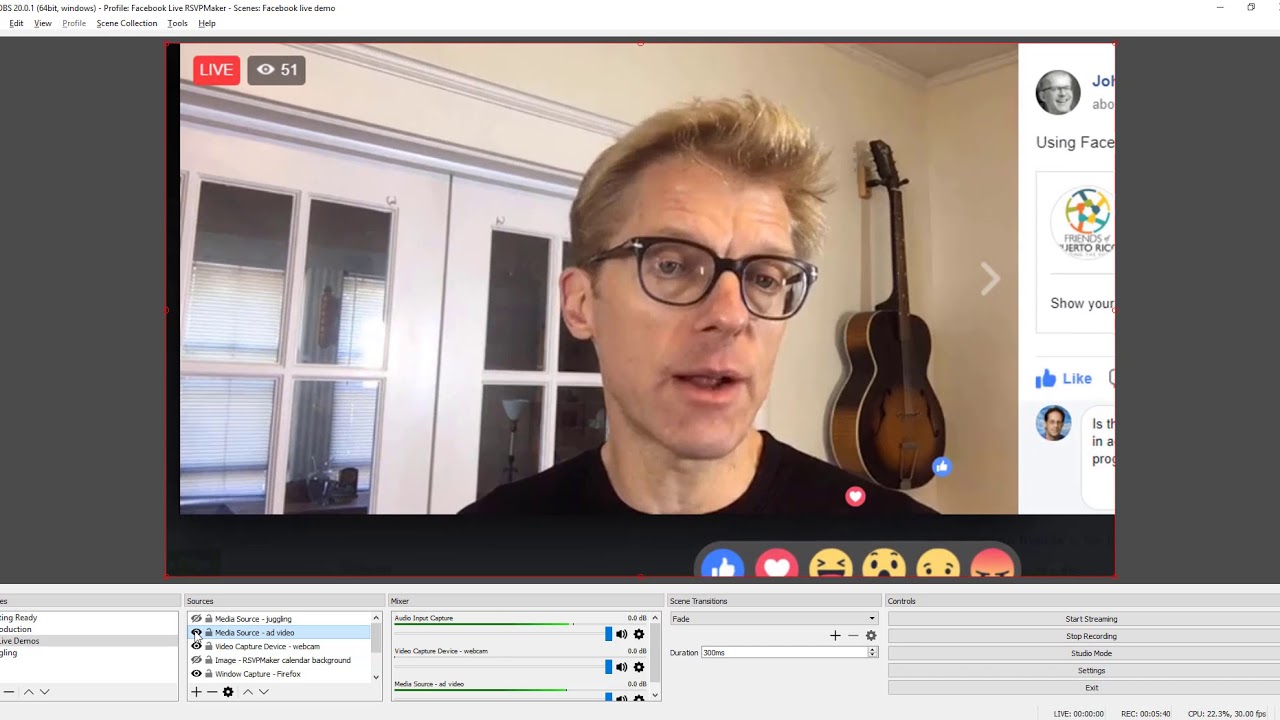 Facebook Live is a very powerful tool for democratizing access to online video broadcasting, but until recently I thought of it as something you could only do from your phone. I knew some professional broadcasters had put on more elaborate productions, but I didn’t realize those techniques were within easy reach thanks to free open source software.

I first used screen sharing used by a mere mortal in a Facebook Live session while attending one of John Haydon’s weekly broadcasts and studying his technique. (See Replay: Workshop on Facebook Live with John Haydon, author of Facebook Marketing for Dummies).

He pointed me to a Social Media Examiner tutorial on connecting the OBS Studio software to the Facebook Live service. That article does a great job of explaining all the detailed settings you need to get right for OBS and Facebook Live to work together. What I’m sharing below are the things I needed to figure out for myself as I considered how I would put these tools to work. In particular, the Social Media Examiner tutorial gives a passing mention to the ability to define different combinations of auto, video, and images as “scenes” in the OBS software and switch between them during the program.

That is what I explore in detail in this first video clip.

To stream from OBS Studio to Facebook Live, you first obtain an API key code from Facebook and enter it into OBS.

Important: If you will be looking at the audience view of your broadcast (as shown here) on another tab of your laptop, or on another device such as an iPad, be sure to mute the speakers (otherwise you’ll get a really horrible echo).

Another way of getting the link to your program is to schedule it in advance. Here’s how.

Welcome to the Show

Finally, here is an example of the output that would result from the tutorial shown above. 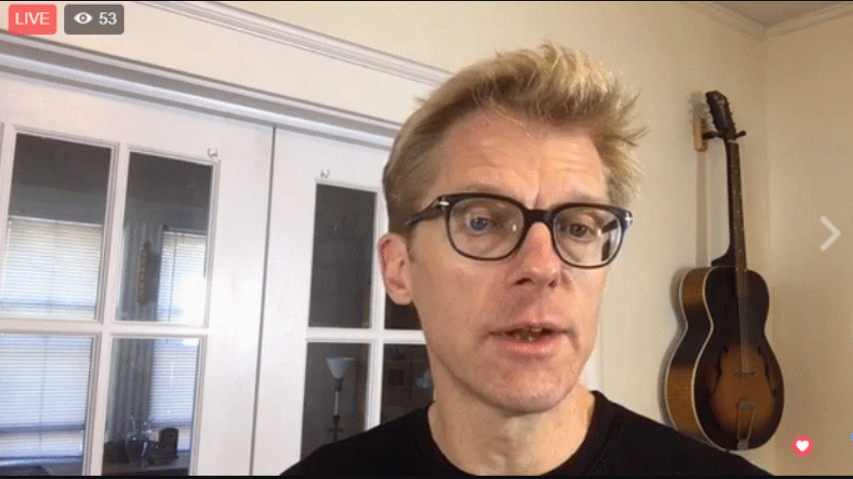 John Haydon visited Online Presenters to show how he and his clients have used Facebook Live successfully to engage with customers, prospects, supporters, and donors. Haydon is the author of Facebook Marketing for Dummies and an authority on social media marketing strategies for nonprofits.

He does a weekly Hump Day Coffee Break broadcast every Wednesday at 11 am U.S. Eastern Time from his Facebook business page www.facebook.com/JohnHaydon.Marketing/

Ironically, given that most of his Hump Day shows are just him talking to the camera (his iPhone mounted on a tripod), you won’t see his face in this recording because he was unable to get his laptop webcam working with our online meetings software. I’ve also shared an example of one of his programs, where the topic was also Facebook Live, below.

Here is a great example of a typical Hump Day show, one in which Haydon is discussing Facebook Live ideas for nonprofits participating in the November 28 #GivingTuesday online event.

In addition to the selfie video style of presentation, I have also seen him do a Facebook Live show from his laptop, including screen sharing. That is possible to do with Facebook Live, although it requires additional software. He uses OBS Studio, a free open source product (see this how-to article). If you need to demo software, that can make sense. However, if you really want to make an emotional connection with your audience, talking directly to the camera may be best.

I’ve done some experiments of my own using OBS Studio and Facebook Live, in search of ways to blend the best of both modes by switching between screen sharing and face-on-camera modes. See my tutorial.

In our workshop, Haydon shared a number of other styles of Facebook Live use, including real estate walkthroughs and broadcasting feeding time for puppies from the animal shelter, that he has seen used effectively.

I believe this is a powerful tool for doing online presentations that Toastmasters ought to learn to use effectively.

We use cookies on our website to give you the most relevant experience by remembering your preferences and repeat visits. By clicking “Accept All”, you consent to the use of ALL the cookies. However, you may visit "Cookie Settings" to provide a controlled consent.
Cookie SettingsAccept All
Manage consent

This website uses cookies to improve your experience while you navigate through the website. Out of these, the cookies that are categorized as necessary are stored on your browser as they are essential for the working of basic functionalities of the website. We also use third-party cookies that help us analyze and understand how you use this website. These cookies will be stored in your browser only with your consent. You also have the option to opt-out of these cookies. But opting out of some of these cookies may affect your browsing experience.
Necessary Always Enabled
Necessary cookies are absolutely essential for the website to function properly. This category only includes cookies that ensures basic functionalities and security features of the website. These cookies do not store any personal information.
Non-necessary
Any cookies that may not be particularly necessary for the website to function and is used specifically to collect user personal data via analytics, ads, other embedded contents are termed as non-necessary cookies. It is mandatory to procure user consent prior to running these cookies on your website.
SAVE & ACCEPT
Toastmost.org Master Privacy Policy